‘Ay Up lad!’ said Fred as he let me go first to open the door of the EPR Arms, ‘You’ll have tae gee yit a whallop! All tha’ sun then’t rain then’t sun. Swelled it annit!’.

You don’t need to go abroad to hear another language. I pushed the door and it didn’t budge.

‘A bigger whallop than that yer Jessie!’

I kicked the bottom of the door and simultanously pushed with my shoulder.

I strolled over to where Bill, the landlord, was polishing his glasses like his life depended on it. A low moan was coming from the other end of the bar.

‘Doors a jammin’’ I said to landlord Bill with more of a reggae feel than I intended. ’ gimme something to cheer me up -a pint of your finest Badgers Crushed Paw bitter will do it landlord and a vodka soda for Fred’.

My request was accompanied by James Blunt’s own peculiar order at his bar in his usual mournful voice ‘Bartender can you pour some love love love’. It didn’t add to my mood as   Adele came on next with her beautifully sung, but painful experience of life and loves lost.

A gloomy night was anticpated – and it didn’t disappoint.

‘Do you mean apart from what’s going on in the world.’

‘Are these just country names you can spell’

‘No these all have ‘issues,’’ I emphasised this by making two inverted ‘air’ commas ‘and that’s not to mention the General Election and Brexit.’

‘I told you not to mention Brexit in here’ said Bill and nodded to a lone figure at the bar who was holding his pint as if it was the last pint of O Negative and he was a vampire with antibodies. ‘Robert is having ‘issues’ with the Bee word.

The moaning I heard as I entered the bar was coming from Robert.

‘Thanks Bill I said taking both my pint and Fred’s vodka soda and sliding over across the bar.

The mumbling was becoming clearer. Sounded like ‘Ivanhoe Ivanhoe’. I edged a little closer it became ‘Idaho. Idaho’. Sitting on the bar stooll next to Robert, I heard his incantation more clearly as if he was at the Wailing Wall.

‘I dont know I don’t know. Why do they think I would know. I mean, I’ve only got an O level in Woodwork. How does he think I would know how to vote.How would I know the implications. Isn’t that their job to know that? Why me?’

He turned to me with his red worried eyes and bags. ‘ I only got an O level in woodwork you know. I didn’t do politics or Geography or Economics.’

‘ What’s up Robert Chuck’ I asked.

‘Brexit. We’re not allowed to talk about it in here but I just didn’t know. I listened to a ‘Remainer’ and I agreed with them that we were better together. Then I listened to a ‘Brexitter’ and agreed with them we were better apart. But who am I to know what’s really really best. I am not qualified to make that big a decision am I? I mean, I only got an O level in woodwork. I ask you!’

I left him to it. He will come to terms with it eventually I guess. What will be will be. A gaggle of A&E staff pushed heavily against the door which eventually gave way and let them in.

Good ! This lot’s usually good for a laugh. 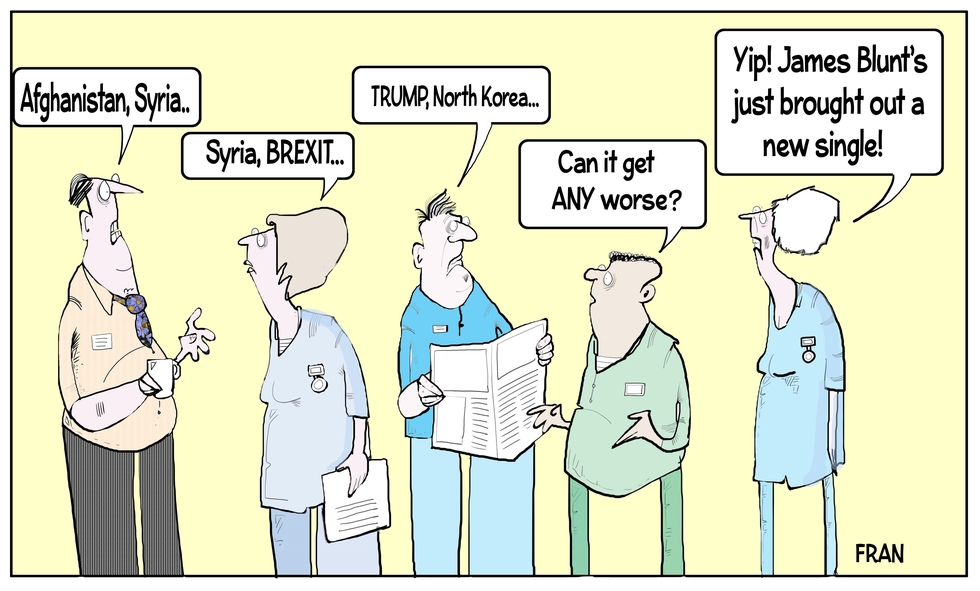 ‘G&T for me – big one’ said Dawn to Simon. Simon ordered the drinks for all 5 of them including two nurses and a consultant. They had all just finished (late) their shift and managed to get in before last orders.

I gave Fred his long-awaited drink and went over to the A&E crowd.

‘So cheer me up then. What kind of carnage have you had today eh?’

‘Absolutely run off our feet again. It is crazy. It is stupid. It is doing my head in’ said Rebecca one of the nurses just grabbing her white wine and soda.’Bedlam Central!’

‘’It’s broke. The systems broke’ said Dawn gulping down her G&T as if she has just returned from a fortnight in the Sahara.’ People can’t get to see their GP so they come to us. We can’t turn them away, so we treat them.’

‘Actually’ I interposed‘you could turn them away. A study showed that a consultant on the entrance to A&E would have the confidence to reject any cases that weren’t A&E .’

‘I can’t do that’ said David the A&E consultant.’ We are two consultants down and anyway, I’m needed in the Trauma Unit.. And we then end up with all our cubicles full and we can’t admit them because the inpatient beds are all full.’

Dawn picked up the pace and conversation, ‘and they’re all full because we can’t always discharge patients to their own home but there’s not enough Care or Nursing Homes for the wards to discharge them into.So we keep them in our £400 a night B&B wards. Crazy. Doesn’t make sense.’

David picked up the topic. ‘In a country that generally runs under the supply and demand model, with a ‘let the market dictate’, I find it hard to believe that, just at a time that we need more beds in care and nursing homes, this sector is closing down. Something doesn’t add up. No one wants to run these care homes. Why is that? Do they not get enough to fund the staff required? Why does no one want that business?’

Dawn again. ‘A&E is NOT like it is on the telly. We don’t have time to all gather round and dicsuss each other’s love lives. We actually don’t even have the time or inclination to create enough to talk about! We are really really- Yes another large one Simes,    busy’. Said Dawn – multi-tasking as always.  ’And scratchings please. Big hard curly ones.’

Another thump on the door which eventually gave way under the collective weight of the clinical coding team.

‘And then there’s ICD11. I mean that’s going to be like starting all over again isn’t it’.

‘The new HRGs too. That’s all going to mean change’.

‘Electronic ICD books. What about my notes?’

‘And year end chaos. Chaos. Year end. Chaos.’ Said James with no attempt at turning it into a sentence.

I decided tonight wasn’t the night to discuss the one-legged juggler on Britain’s Got Talent - there’s much too much going on in the world - one way or another.

As I struggled to pull the door open I turned to Bill ’Why can’t you get this flippin’door fixed Bill.It’s been like this for ages’

‘I can do that. I’ve got an O level in woodwork!’ said Robert who at last seemed to be coming out from his dark place.

There’s hope for us all. Hang on in there folks.