When do I stop saying ‘Happy New Year’ I asked Frank in the pub the other night.

‘Well, to be fair I think you’re milking it a bit now were in February’ he said with his usual frankness. Well it would be wouldn’t it?

‘Speaking of milking it, how’s your cows getting on?’ he asked.

‘Two pints of Badgers Crushed Paw bitter please landlord,’ I shouted in the direction of Bill the ever-busy barman/landlord/chef.

‘Yes. Daisy the cow and Jasper the dog’.

‘Is this the start of one of your jokes? A cow and a dog walked into a bar’

‘By ‘eck you’ve lost it big time. Cheers’ he said taking one of the pints from me and heading to a table in the corner. Bustling busy Thursday. Nearly weekend. Nearly. ‘ I saw you do a presentation once about Daisy the cow and Jasper the dog’.

‘OK and now I’m back in the room’ I said, now confident that I hadn’t slipped into a paralell universe’.

‘ A presentation. That was years and years ago.’ I continued pulling the buffet towards me. (Buffet is a Yorkshire stool and is NOT food related.)

‘I know, but it left an impression. Not sure if that was a good or bad one but remind me and I will tell you’.

‘Well ,’ I said licking the froth from the side of the glass. Not a good habit but waste not want not (as they say in Yorkshire.) Frank adds ‘many a mickle meks a muckle’ as the say in either Scotland or Jamaica (depends on where you search on Google for proverb meanings! )

‘Well – it was based on a conversation I had with a farmer - in here actually Frank. And he was called Frank, Frank. Coincidence or what. Back in 2005. Wow! Eleven years ago. Gosh! Anyway, he told me his tale. This tale to be frank:

“I bet that was hard chasing them all.”

“Well no actually. They want to be milked, ‘cos they get full and uncomfortable don’t they? Their udders is busting and swollen. So now’s I’ve got this fancy milking parlour, they come and get milked whenever they want. 24/7”

“Well, I’ve chipped them all: a little tag on their ear. They know that when they enter the parlour they’ll be fed, so they approach the unit and the unit knows who it is by their chip. It releases the right amount of feed and checks if they’ve already been milked. They know the teat configuration and size (‘cos all cows udders are different), and the teats config has been measured by laser and stored in the unit. It then sterilises the teats. Attaches the milking cup thingy-bobs and milks each teat one by one.”

“Yip. Instead of sticking a four teat vacuum thingy-bob on and sucking till all milk has come out, it measures milk flow and conductivity for each individual teat, and stops when the flow stops.”

“Yip. Clever innit? The ‘lectricity flow across the milk is affected by things like infection.”

“Yip. It plots graphs of the milk flow and conductivity of each teat. You can see which teat is infected and it sends me a text message on my mobile. And I’m still in bed!’

“And wait for it, and this is the best bit, I end up with an electronic record of Daisys health and stuff.’

‘Health and stuff?’ I asked incredulously.

‘Yip. I have a record of Daisy’s milk yield, weight, food eaten, so I can work out if there’s a problem. I’ve even got her wearing a pedometer so I know how far she’s walked.” 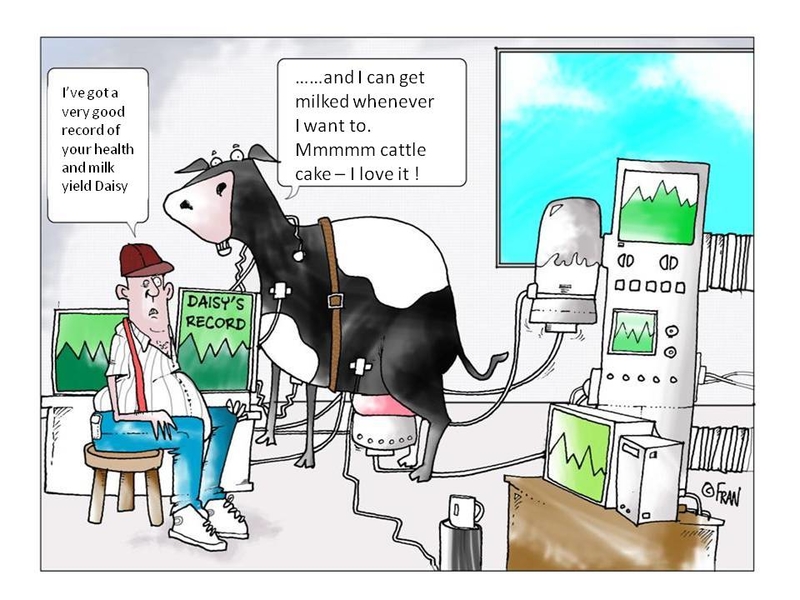 “Because you’ve been going on for years about your electronic health record, your EPR and how that record should be a by-product and not simply the objective.”

I was impressed he’d latched onto my mantra – oft repeated, mostly by me! “Yes. Support clinicians in what they do and what they’ve done is automatically captured” I repeated mainly for Frank’s benefit.

“It’s the same with Daisy. My aim wasn’t to produce a record of Daisy’s health or milking history. I just wanted to get her milked efficiently. The computer is supporting the milking process and offering decision support and guidance: not too much food today. One of the teats is poorly etc. But you end up with all of it recorded electronically.”

‘Wow!’ So you’ve got an EPR equivalent?

‘Yes sir. Instead of having lab test requesting or your electronic prescribing, I’ve got milking. My milking is supported with technology. The computer directs me to capture the correct information that I need, it offers me guidance and support and it gives me, in return two things.’

‘Yip. An electronic record AND a lie-in!’

‘You see Frank, some folk in our NHS lose track of what EPR is all about. Some think going paperless is the objective but it’s not. Supporting our busy doctors and nurses with computers simply improves their effectiveness and ensures all the right clinical data is captured by them during that episode and makes that available to others to impove their interractions with the patient. The fact that we need less paper is simply a by-product of using these epr type systems to support them in what they do.

‘So those Trusts that are responding to Jeremy Hunt’s vision by scanning their paper casenotes are barking up the wrong tree?’

‘Not necessarily, scanning the old legacy paper has a place in this emerging electronic record. But simply ‘going paperless’ by scanning does not give you the real clinical benefits of a proper epr system.’ I detected that I was losing Frank - he was eyeing up the Guest cask ale hand-pulled pumps and twitching nervously.

‘Frank! Frank. Let me explain: We could take the paper drug charts from the ward and either get someone to scan them every night or type in the drugs/dose etc for each patient on that patient’s EPR. That would give us an electronic record of what drugs had been prescribed and which were administered and by whom and when’.

‘Isn’t that what you want?’ asked Frank frankly losing interest by the minute.

In part yes, but we actually want these clever EPR systems to influence what drugs are being prescribed. We want decision support at the point of care. It’s all very well knowing later that what killed the patients was a dose six times higher than normal. We want to know that while the drug is being prescribed and certainly before it is being given.

‘And you end up with an electronic record of what was prescribed and administered?’

‘Yes- we end up with Daisy’s record!’

So that was where you got your presentation from? And what about Jaspers record?’ asked Frank being Frank again.

‘Jasper is another story for another night. Same again? Your shout!’