Another busy night in the EPR Arms. Not quite autumnal but going that way. Nights getting shorter but  leaves refusing to leave their tree. TV Sofa ads promising delivery before Xmas. You get the drift - but not for a few months yet - not cold enough.

James Beattie, is the new Information Manager across the road at the local Trust and he’s just popped in after work for a 'snifter' before going home to his hot-pot and red cabbage. He had found Rupert, Surgical Directorate Manager, just getting them in for me and him, so he cleverly slipped into his slip-stream and sneaked a pint of Badgers off him.

"Ay Up! James,’ I said acknowledging the recent addition to the round, then back to Rupert,  ‘I am not saying it’s better Per Se Rupert,' I continued, taking my pint of Badgers from his outstretched hand, 'I am just saying that is the way of the world. You just can't stop modernisation just as you can't stop globalisation and mobilisation and any other 'ation' you care to mention. Digitisation is happening whether you like it or not'

'John Lennon!' said Tim - the hospital electrician sitting on a bar stool who had swivelled round to join in.

'It's nothing like!' said Rupert and I in unison.

'That's better and thanks for your input Sparky. Haven’t you a fuse to go to?’

Rupert now directed his comments to James while his eye searched for somewhere to sit, ‘I was just saying James, this rush to digitise the clinical record is causing real issues with my docs and nurses. I mean real issues.’

‘In what way Rupert?’ asked James.

‘Well for a start the number of separate clinical systems and their passwords. Nightmare. And there’s still lots of sharing passwords - on wards and in clinics. I see it every day in my Directorate'

'Is that still happening Rupert?’ I asked, assuming this had all been put to bed years ago. ’Doesn't everyone know passwords are to be kept private?'

'Yes perhaps they do, but the clinical systems that these busy doctors and nurses are using are the problem.' James replied

'I'll tell you how!' said a very grumpy and tired looking Junior Doctor – bursting through the door and wiping the rain from her wax Barbour jacket. Just off-duty from A&E, it was Dawn by name and grumpy by nature. 'I'll tell you what! ‘Gin & Tonic Simon' she bellows across to one of her 'Caz' mates who’d just arrived at the bar. 'Simon, this guy wants to know what I think about 'computers'.' She spat out the word with enough venom to make all of us take three steps backwards. 'I'll tell you what. The Trust has made moves towards some almost integrated electronic patient record systems or EPR as they call them. That sounds like I am logging on to one system doesn’t it. One EPR. Wrong. Wrong. Oh how so flippin’ wrong. It actually means us busy clinicians accessing three or four different systems. Don't you think we've got enough to do without having to mess about with computers? Don't you?'

'I've watched Casualty on the telly on a Saturday night and Charlie is never busy. He just spends his time checking the ceiling tiles are still in place’ I said sidling over to a free table to bagsy and at a safe distance from Dawn.

'Don't believe all you see on telly Sweet Cheeks' replied Dawn. 'Not all systems are linked - most of them we have to log in separately: That means remembering - Log in Names. Passwords. Four different log-in names and four different passwords for the four different systems. I can't remember them all so I just write them down on a post-it note on the monitor'

Rupert looked at James across the table.

Dawn continues, 'so imagine you are on a busy ward or in a busy clinic or in A&E and you've logged in to your 'EPR' and you get called away to look at another patient in another cubicle. Someone takes your place at the PC and needs to urgently order some tests or prescribe a drug. It is very, very tempting for them to just carry on with the EPR logged in to YOUR log-in details. Saves time.

James jumped in at this point. 'OK Dawn – we appreciate that. But don’t you realise that’ll mean that anything done on that machine will be done against YOUR name?’

‘Exactly! If I don’t log out, because I’ve got called away urgently, then anyone can do whatever they want in MY NAME’

James continues, ‘But in court you will have no defence. If someone 'takes over' your PC and then prescribes a drug incorrectly - then what defence do you have? The overdose was prescribed by you as far as the court is concerned.'

"OK. OK said Rupert, ‘the basic issue here is why do folk not log out?' he directed the question at Dawn who by now had finished her first G&T and was waggling her glass at the bar for a refill. ’Simon! Another!’  Wow she MUST have had a bad day!

'I'll tell you what: Time. It takes SOOO long for a PC/workstation to fire up and allows a new user to log in with their own details.'

'But that is changing isn't it?'

‘Yes but will it change in my lifetime? They have been promising an all singing all dancing EPR for decades. Decades.’

Rupert begins to waken up to the theme. ‘You know, I'm beginning to think this electronic record just isn’t worth it. Just keep paper. It works fine.’

'What you guys talking about?' said Simon another of the JD’s from Cas, struggling with two beers (for him) and a large G&T (for Dawn) and a bag of scratchings clamped in the corner of his mouth (hopefully for us all.).

"Rupert was just saying that all this palaver with electronic records, he wants to go back to the tried and trusted paper casenote.

'Can't do - no turning back the clock' said Simon tearing open his scratchings and offering them to all on the table.

'But there was nowt wrong with how it was. I think we should go back' said Rupert.

'And I want to be twelve stone with brown hair' I said. 'It ain't gonna happen'.

Simon continues, 'And anyway, the NHS has changed. Moved on. It's no longer the place where you can have a leisurely tonsillectomy with a ten day length of stay. It's all different. All changed. More care in the Community. Changed. For all we hate these flipping computers, we need them. But we need them to be right.'

'And how do we do that?’ asked James.

‘No – Professor Wachter. He has written a brilliant pragmatic guide to IT in the NHS which came out last month (and a summary is available here on the NHS Digital website with an even more concise summary here on the IHRIM website).

He continues, ‘Professor Wachter reckons, and I quote ’The goal is not digitisation for digitisation sake, but rather to improve the way care is delivered in the NHS, in part by using digital tools.’ 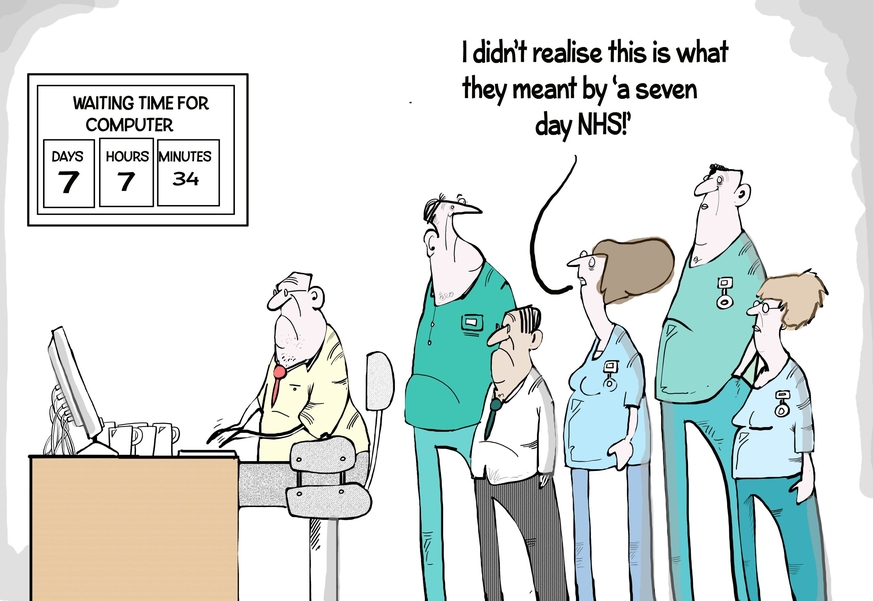 ‘And that is exactly what the NHS EPR Programme concluded in 1998’ I added. ‘We seem to have lost our corporate memory.’

‘In what way?’ asked Simon.

‘Have a look at the final reports from the EPR Programme. It concluded that it wasn’t about creating an electronic record in hospitals Per Se, it was about supporting the clinical care processes with technology and the record will be a natural by-product. Use decision support tools where appropriate with the aim of improving clinical care. It seems that the NHS is on the road to getting rid of paper, but this is the end product not the goal in itself.’

‘Exactly’ we all said almost together.

’And the time to do it is when all the appropriate infrastructure is in place, and we have all this logging-in nonsense resolved and enough hardware to stop us queuing for a free PC’ added Simon.

‘Yes actually that is a very fair point Simon’ I said, ‘I was in Malaga airport last month. Worked brilliantly – on-line booking; turned up at the airport and plane left on time, suitcases delivered to the right country BUT the queue at Passport Control was a nightmare’.

‘In what way?’ asked Rupert.

I continued, ‘They are going over to this digital/retinal scan/finger-printy model. Brilliant concept. But there is not the infrastructure yet for it to work. They only had two digital/retinal scan/finger-printy workstations!  TWO and a man in a box for Luddites who preferred the old way. The queues were almost back to the plane. In the end, the man in the box just waved everybody past him grumpily. They are not ready yet. You only get one chance – make sure the timing is right. Make sure you have the right technology in place, otherwise there will be trouble.’ I finished with a flourish.

Speaking of trouble, Dawn was well through her second G&T and detected a summing up of the discussion so she stopped drinking to add her twopence worth. ‘The techies have got to really understand how we clinicians work. We can’t have separate systems with separate passwords. That is crazy. We’ve got to have a quicker way of logging in and out. A Proximity card tap. I’m in. Tap I’m out. Simples.’

‘Is that all?’ asked Rupert.

‘No – it has GOT to be fast and well designed. I just haven’t got time to look for ‘stuff’ in three hundred scanned pages of rubbish. I need to see it in a well-designed place. Zap Zap Zap and Zing. Got it. If I can’t find it I’ll miss it. That could be dangerous. With the paper record, at least there was an understanding that not everything was necessarily there but you could easily flick through and find enough to crack on. But with these computers, we ASSUME everything is there. It may well be, but unless we can get into it quickly and find it, we’re up a creek without a paddle.’

‘Anything else?’ enquired Rupert, ‘Before we go?’

‘Yes – computers can be brilliant. They can help guide busy clinicians through decision support. Just because someone has said we have to be paperless in 2018 – no! -  2020 - no!  2023, doesn’t just mean simply scanning the paper casenotes. Oh no! We have to use technology to get all the above clinical benefits. To change the way that we deliver clinical care. Make it easier and also safer.

At that point everyone decided to move out into the wind and rain without a paddle or umbrella, at the end of another hard day at work and harder evening in the EPR Arms.

How is your Trust designing your electronic records?

Are they involving the doctors and nurses?

Are they involving you, in Medical Records?

How are they scanning the paper record? Is it being structured in an easy to access way or is it simply a single big fat file?

And why does Charlie Fairhurst keep looking at the ceiling?